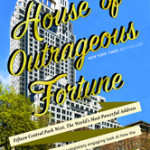 Eighteen days ago, the New York Times began a front page series on the real owners of condos in the Time Warner Tower on Columbus Circle–many of whom hide their real estate holdings behind trusts, offshore companies and limited liability corporations, and some of whom are fairly sketchy characters. Today’s Alexa Luxe Living supplement to the New York Post features a front page piece on Midtown, calling it the “white-hot core of New York’s luxury housing market” and discussing much the same phenomenon. You read it all here–and in House of Outrageous Fortune–first, of course. But Gripepad is grateful nonetheless for the opportunity to remind the still- or newly-intrigued that the whole–and dare I say it, epic–story of the rise of the luxury condominium in New York, the remaking of midtown, and the arrival of wealthy foreigners, including some seriously sketchy characters–reached its apotheosis at 15 Central Park West and is told in the book, which comes out in paperback on March 10th.