Much Ado About River House 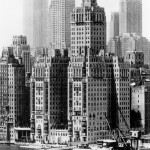 Having put itself back on the map this February, River House, the storied co-operative overlooking the East River, has been vigorous about keeping its name in the news throughout 2013. My second column on the building, revealing the story and the controversy behind its attempt to dispose of the premises of the equally august River Club–for a record $130 million–is out today in the December issue of Avenue magazine. The New York Observer also has an item today on Uma Thurman‘s purchase of a River House apartment. The February River House Unreal Estate column is linked here.