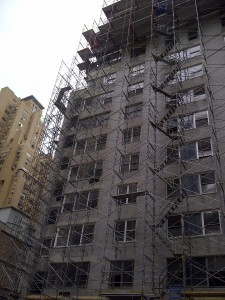 Robert A.M. Stern long ago put his mark on New York real estate with his monumental set of books about the city’s changing architectural face. Now, he may be about to put his mark on a micro-neighborhood. Following his huge success with 15 Central Park West (subject of my next book for The Free Press), several sources tell me he’s been approached to design a replacement for the white brick non-entity at 220 Central Park South. The focus of a dispute pitting two of the city’s development giants, Extell and Vornado against each other (Vornado owns the site, while Extell owns several nearby and holds the lease on a parking garage below 220), 220 CPS is also a bit of a mystery: No plans for it have been announced or filed. But the rear facade of the building is now scaffolded (see photo) and, as of this morning, crawling with workers, likely signalling its imminent demolition. A new building by Stern, whose updates on classical architecture are well-regarded, would fit in beautifully with Fifteen, just around the corner, with the mid-Century modern landmark 240 Central Park South on the corner of Columbus Circle and, abutting the Vornado site on its CPS side, the 1908 Gainsborough Studios, with its duplex artist’s studios towering over Central Park. Sternville, here we come?