“Nothing is worse than the movie business,” said Alec Baldwin 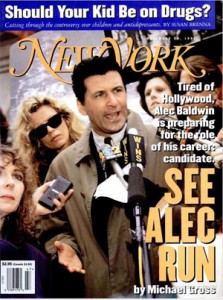 In 1997, I spent several days with Alec Baldwin for a cover story in New York magazine on his political ambitions, then said to be running hot. Baldwin’s political opinions continued to run hot, even if his path to a career in politics went nowhere. Now, with his movie career disrupted by the shooting death of a crew member on his latest film, here’s Alec in happier days.