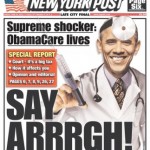 Thanks to the New York Post, I learned this morning that my current health care plan, called a sole proprietor plan, will cease to exist on January 1st thanks to the new rules of Obamacare, so I ventured onto the New York State healthcare marketplace website to find a replacement. My first discovery: the website doesn’t play well with Internet Explorer. So, firing up Google Chrome a half hour later at the suggestion of the official helpline, I finally got myself registered and tried to shop, only to discover a menu of mostly off-brand health insurance carriers none of my doctors accept. My current, carefully-chosen carrier? Not represented. So I called my doctor, who prescribed a plan with generous out-of-network benefits. Back to the website, where, no surprise, none of those listed includes any out of network coverage. So I called the state helpline again and learned from someone named Courtney that “unfortunately” the web site doesn’t actually list all the available plans and I would have to call each carrier individually–but after a half hour on hold at Empire Blue Cross, I got blue and cross. So I called my insurance agent, who told me he is thinking of quitting the business. Me, I’m thinking, this is a textbook example of FUBAR.