One more comment on Miss Maslin, if you please. 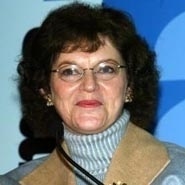 Yesterday’s post of excerpts of comments on the attempted take-down of Unreal Estate by Janet Maslin (at right) has inspired another one, this one worth reprinting in full. It’s from a bestselling author and journalist whose work frequently appears in, ta-da, the New York Times:
“Janet Maslin should stop reviewing. She is getting tired, lazy and cranky. She creamed over a book — Annie Jacobsen‘s — about the history of nuclear tests that was absolutely excoriated by nuclear expert Richard Rhodes, and others, for having fraudulent material in it. She writes reviews like she just wants to get them over with. She takes lovely, thoughtful books — like Christina Haag‘s memoir — and is innacurately and unfairly nasty about them and totally doesn’t get their integrity and originality. Maybe she should move on to another gig. Too long doing one thing is never a good thing. This utterly churlish and nasty review of Michael’s fine book and his estimable, highly well received and bold body of work proves it.”