One57 Mystery Buyer: A (Not So) Big Reveal 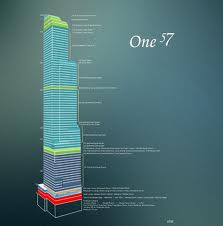 Our local newspapers are lately locked into a top-this battle to hype uber-luxe apartments for the uber-wealthy. Extell’s Gary Barnett, now feverishly flogging his West 57th Street development One57, is the current master of highrise hype. But though his fan dance is all about obfuscation, the real estate gossips are all atwitter as he pours sweet nothing-much in their ears about how many apartments he’s sold and to whom, without ever naming names. Barnett is also obsessed with 15 Central Park West (subject of my next book, btw), the reigning monarch of big-money buildings, so in his latest act of billionaire peek-a-boo he’s whispered the news that some buyers at Fifteen have shifted allegiance to the new kid on the block, but typically won’t say who they are. Trouble is, one of them is a guy who flipped his 15CPW pad rather than moving into it. Barnett’s burlesque has somehow made this little factoid a scoop, so let it be known that Michael Holtz, owner of The Smart Flyer travel agency and, now or previously, of apartments at Fifteen and the nearby Park Imperial, and four–count ’em four–condos at Richard Meier‘s 165 Charles Street, is one of the Fifteenies who’ve signed on the dotted line for a place at One57. In an interview for my book on Fifteen, Holtz told me he was first attracted to the building because he sits on the advisory board of Park Hyatt Hotels, which will be One57’s anchor tenant. “You can also say he’s not a billionaire,” he added, laughing. But will Holtz move in or will he flip again? Not even Barnett knows that.