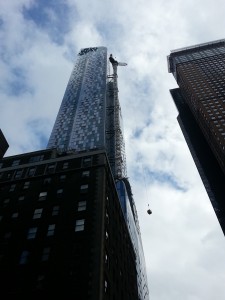 I got an earful today from one of the city’s top luxury apartment brokers on the stalled status of sales at Extell’s much-hyped One57, and the news is, alas, less than extellent. Months ago, as he touted sales of trophy penthouses for sums in excess of $90 million, Extell founder Gary “Dangling Boom” Barnett claimed his condos (which sit atop a planned Park Hyatt hotel) were 70% sold out. But sales, I hear, are even more stuck than that concrete block that dangled from One57’s trouble-plagued crane earlier this week, with most of the 30% of unsold units in the middle floors of the building, where park views are blocked by the landmark Essex House tower. “They got too crazy and priced the middle too high,” says the broker, who nonetheless expects closings on the high-floor units to start next February or March. If nothing else goes wrong at the star-crossed tower of power, that is. UPDATE: Community Board #5 has refused to approve and demanded more information from Extell about its second 57th Street tower on the former site of the Hard Rock Café. Kim Velsey reports the story of this latest glitch in Extell’s plans on observer.com today.