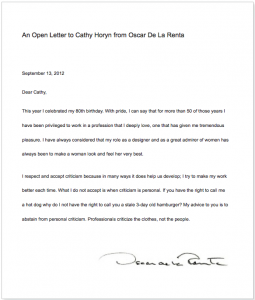 In today’s WWD, Oscar de la Renta (formerly Oscar Renta), the fashion designer and husband of Metropolitan Museum of Art Vice Chairman Annette de la Renta (formerly Anne France Mannheimer, Annette Engelhard, and Annette Reed) sticks a pin into New York Times fashion critic Cathy Horyn. The question is, Huh? Oscar was apparently offended by a generally positive if cursory review of his latest “lively…generally cantankerous” runway show, in which she Horyn called him “far more a hot dog than an eminence gris” of Seventh Avenue (he is, IMHO, both). In response, de la Renta bought a full page ad in which he attacks Ms. Horyn. “Dear Cathy,” he writes in part, “I respect and accept criticism because in many ways it does help us develop…What I do not accept is when criticism is personal. If you have the right to call me a hot dog why do I not have the right to call you a stale 3-day old hamburger?” The de la Rentas both figure prominently in Rogues’ Gallery, my book on the Met Museum, and Mrs. de la similarly took umbrage with her portrayal therein, in which the personal mixed with the professional, as it does with most public personaltiies. In that case, she threatened, although never followed through with, litigation against the book. Oscar will no doubt also come to regret his outburst, which only draws attention and sympathy to Horyn. My advice to both de las: reading comprehension courses.