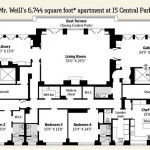 Ekaterina Rybolovleva became a 23-year international phenomenon two years ago when her father, Dmitry Rybolovlev, a billionaire former Russian fertilizer oligarch, bought Sandy Weill‘s penthouse at Fifteen Central Park West (floorplan at right) for a record-setting $88 million, and said it was for her. His then-wife begged to differ, claiming he’d bought it to hide money from her in their ongoing divorce. As reported exclusively in House of Outrageous Fortune, Ekaterina rarely used the penthouse, however, and now that the Rybolovlev divorce has concluded, so has the charade that the empty residence is the young lady’s home. She celebrated her 25th birthday this week on the Greek island of Skorpios, another gift to her from Big Daddy Dmitry, bought from Athena Onassis. It’s closer than 15CPW to what Cyprus Daily reports is real residence, a London apartment.