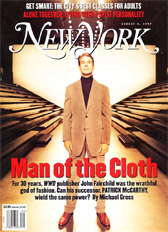 It’s been a bad season for fashion and today comes the news that Patrick McCarthy, former editor of W and WWD, has died at age 67, after a long period out of the public eye, and, reportedly, a short illness.  I profiled McCarthy at the height of his power and influence in 1997.  You can read that story, “The McCarthy Era,” here.  One caveat:  McCarthy, who never married, nor had any long-term significant other, and never made his sexuality a matter for public discussion or commerce, as many of my subjects did, agreed to cooperate on the condition that I not delve into his private life.