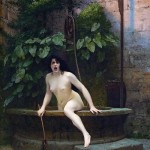 Echoing one of the themes of Focus–that an era has ended–photo editor and photographer Nick Knight has given an interview in which he goes a step further and declares photography dead. Then Knight, whose web site describes him as “among the world’s most influential and visionary photographers,” goes on, positing that photography has been usurped by what he calls “image-making — please could someone get a better description of it — because that’s what I do,” he says. “Because that can take in sound and movement and 3D, which I think are really part of this new art form. So it’s based on image. That gets away from the thing of truth. Photography has been saddled as the medium of truth for so many years. That’s where its criticism has always been directed, ‘This photograph has been manipulated.’ At the New York Times, you can’t have retouching because retouching is somehow cheating. I’m very pleased that image-making has freed itself from those constraints. It’s a totally new medium and that’s what I think I do.” Of course, creating the illusion of new-ness is really nothing new at all. Putting old wine in new bottles is what fashion and fashion folk like Knight have always done. And that’s the truth. (The painting is Truth Coming Out of Her Well to Shame Mankind, by Jean-Léon Gérôme, 1896)