Public Enemy? My Dinner with Dick and Liz 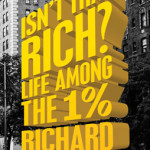 Richard Kirshenbaum, the ad man, has written a book called Isn’t It Rich? (out in June) and I’ve written an introduction to it, Liz Smith reveals on today’s New York Social Diary. In her account of our dinner together the other night at lovely Le Cirque, La Liz makes the case that Kirshenbaum and I are “enemies of the Manhattan wealthy,” because we sometimes write about the one percent. I know Liz doesn’t really equate coverage with clawing: she’s been excoriated for writing about the rich and famous likes of the late Frank Sinatra and the living Donald Trump. But I suspect that like me, she’s learned from experience that in some circles, accuracy is considered aggression.