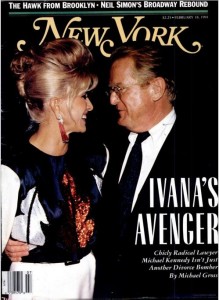 The New Yorker has released an alternately loving and profane documentary on the late (and unexpectedly potty-mouthed) radical lawyer Michael Kennedy and his wife and trial consultant Eleanora Kennedy. Its tight focus is their youthful radicalism. For a lot of the rest of the story (and there’s a lot), here’s my 1991 cover story on the couple for New York magazine, written when he represented Ivana Trump in her divorce from that guy. Though my story was positive toward Ivana, the Kennedys threw me out of their apartment one question into an interview–and I got curious about them. The result was one of the most fascinating reporting adventures of my life.