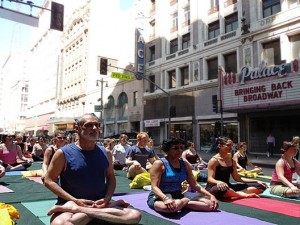 I didn’t like Janette Sadik-Khan before she started her campaign of stealth closings of streets (like Broadway, above) and lanes. Her Department of Transportation’s contempt for mere citizens (i.e. folks without private planes to whisk them away from New York or chauffeured SUVs with sirens and flashing lights to bull their way through traffic jams) was clear to me after DOT authorized street work in my midtown neighborhood at unGodly hours on weekend mornings and once, jackhammered the street right outside three big apartment buildings at 4:30 AM, claiming it was an emergency (because a mini-Marathon was scheduled a few days later). Something tells me that’s never happened on Mayor Bloomberg‘s block. On Monday, I let loose on Sadik-Khan in Crain’s and found myself attacked in tweets and on blogs as both a sexist (for referring to her as Roberta Moses) and a bad writer by pro-bike lane forces I don’t necessarily oppose. So I must admit I have rather enjoyed the New York Times’ two articles this week on the DOT commish and her autocratic ways. The first let me know that I was far from alone in questioning how this alleged public servant does her job. But the second, today, was even more gratifying. It reveals an organized campaign, including one of the very blogs that derided my opinions, to brand Sadik-Khan opponents as “shameless, selfish pigs” who “need to be publicly disgraced every time they pop their heads up.” Ain’t civil discourse a wonderful thing?