Some crack with your Central Park views? 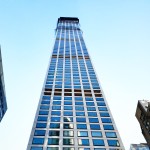 The latest addition to the Billionaire’s Belt girdling midtown Manhattan, and a ubiquitous new feature of the city’s skyline, is the Rafael Viñoly-designed CIM and Macklowe Properties-developed 432 Park, now nearing completion and briefly enjoying its moment in (and near) the sun as the Western Hemisphere’s tallest residential building. Less visible, but still right there in front of our eyes, is what I’m told is a, cosmetic problem. Two unconnected sources confirm that the architectural concrete that covers the poured concrete tower has already developed cracks, and that scaffolds hanging from the pillar in recent weeks were there because Nicholson Galloway, a top masonry restoration company, was hired to coat the structure with some “nasty stuff,” as one of those sources puts it, called Silane that will seal those fissures…for a while. Wikipedia describes Silane as “a colourless, flammable gas with a sharp, repulsive smell” that is used as a water repellant, and to protect masonry. Citing a confidentiality agreement, an official of Nicholson Galloway declined to discuss the matter. Anthony Manion, the principal in charge of the project for LendLease, 432’s builder, did not return three calls over the course of a week requesting a comment. LendLease, it’s worth noting, was also responsible for building One57, home of the famous dangling and dangerous construction crane of Hurricane Sandy fame. (The image is of 432 Park, under construction, a year ago this month.)