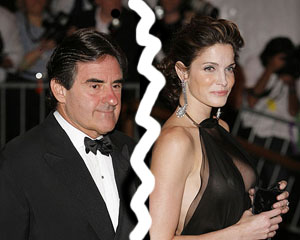 Styles of the Times has just posted a piece on the Peter Brant-Stephanie Seymour divorce that is, alas typically, a day late and a dollar short. Anyone seeking more telling background on this fiercely ambitious and oddly-well-matched pair may want to dip into Model, where the compelling Mr. Brant’s criminal record (which goes unmentioned in the Times), and the stunning Ms. Seymour’s riveting sexual past with the likes of John Casablancas (it gets a sentence), Axl Rose (two sentences!) and Warren Beatty (also unmentioned) are given a full airing. A small taste, describing a 1992 fight between Rose and Seymour: “Seymour swung at him with a chair and punched him in the crotch. Stephanie, said the singer’s sister, ‘wants to push thing to the edge.'” She met her match in Peter Brant.