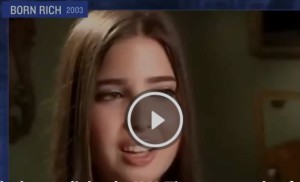 Last night, in a commentary on Donald Trump‘s tax-dodging, Samantha Bee resurrected a clip from a 2003 doc in which Ivanka Trump recalled encountering a beggar with her father in the early 1990s. Apparently, this is a Trump family schtick, because her father told me the same story about four years earlier, only then, he was walking down the street (a dubious notion by itself) not with Ivanka but with his second wife, Marla. Compare and contrast Ivanka’s story with an unedited section of the transcript of that interview after the jump.

IVANKA (2003): “I remember once my father and I were walking down Fifth Avenue and there was a homeless person sitting right outside of Trump Tower and I remember my father pointing to him and saying ‘you know, that guy has 8 billion dollars more than me,’ because he was in such extreme debt at that point, you know?”

DONALD TRUMP (1999): In 1990, the real estate markets crash. I’m stuck out there. I have this real estate, all of it… I have billions and billions dollars in debt. You know, many many billions of dollars. You know that story I told about Marla walking down the street, which is interesting… Do you know the story?
MG: I don’t know which one you tell.
TRUMP: Walking down the street in front of Tiffany’s, and the beggar.
MG: No.
TRUMP: Oh, you didn’t hear this?
MG: I never heard this.
TRUMP: In 1990 I was walking down the street with Marla in front of Tiffany’s, on the other side of 57th Street, and I said, “Look at that man over there?” I said, “Do you know what he is?” She said, “Isn’t it too bad? He’s a beggar.” You know the guy who used to stand in front with the tin cup and the dog, the seeing-eye dog?
MG: Yeah.
TRUMP: He was there for years. I said, “Well, you know, he’s worth $900 million more than I am.” This was in 1990. And she said, “Oh, isn’t that too bad, but what do you mean he’s worth… He’s not worth $900 million.” I said, “No. He’s worth nothing. I’m worth minus $900 million.” Because what happened is, the market…
MG: I understand.
TRUMP: And I had billions of dollars, many, many billions of dollars of debt. And by the way, at one point I was under-leveraged. All of a sudden I was over-leveraged. So I had to… I had… The most interesting three years of my life was from 1990 to ’93. Not necessarily the best time of my life, because it certainly wasn’t. But I learned more about myself during those years than any other period of time in my life. Because I learned what… I had never had adversity. And all of a sudden, I am being fuckin’ creamed. I’m getting creamed in the press, I’m getting creamed in everything.
MG: Well, you’re getting creamed because you so encouraged your own celebrity, and created it.
TRUMP: Right. Well, no, it played the opposite way. Right? I created something and now, all of a sudden…and people are having a good time.
MG: He who lives by the media shall die by the media.
TRUMP: Right. Exactly. And I was getting fuckin’ creamed. If another guy had a problem, nobody gave a shit, but if anything slightly… They build it up too much; they tear it down too much. It’s like… Believe me, it works both ways.

And no, Donald, people aren’t having a good time.