The Art of the Dis 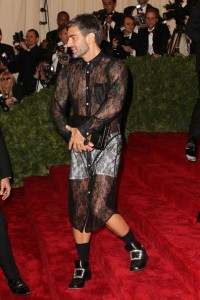 Monday night’s Costume Institute Gala at the Metropolitan Museum garnered less press attention than in previous years, but from the armchair view of one of the uninvited, the celebrity petting zoo was still a spectacle worthy of Rome. My favorite snapshot was of Marc Jacobs in a lacy see-through Comme des Garcons dress, Colonial-style buckled shoes and a pair of Brooks Brothers boxers (pictured). It reminded me of the night in 1990 when the Met Ball’s current mastermind, Vogue editrix Anna Wintour, turned up at a Giorgio Armani party at MoMA in a bright yellow sequined scuba-style dress by Karl Lagerfeld for Chanel. Why’d she do that? My guess was that Armani’s command performance–the premiere of a vanity film plunked into the midst of a busy fashion week–annoyed La Wintour. Who knows. And I don’t know what, besides a desire for attention, inspired Jacobs’ jaw-dropping outfit, but more power to him. Other observations: The New York Post front-paged the gala itself, the Times buried its coverage but front-paged an article about Amazon’s sponsorship of this year’s gala and the (surely entirely coincidental) simultaneous supercharging of its effort to compete with brick-and-mortar fashion retailers. Nice advertising, Amazon! My favorite comment on the gala comes at the close of New York Social Diary’s coverage by David Patrick Columbia. “Compared to the house that Vreeland (and the ladies) built,” Columbia writes, comparing the veddy social Met Party of the Year run by Diana Vreeland with today’s, “it may be just another McMansion, but then, that is the American culture of this era. Vogue is now. Anna Wintour is now. She is the Wintour of our discontent, and she’s damned good at it, you have to admit.” Another dis in a designer dress?