The Circle Game: The Whitney and the Metropolitan 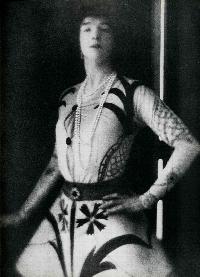 Art + Auction’s In the Air column revealed a few days ago that the Metropolitan Museum of Art is talking to the Whitney about taking over its Madison Avenue headquarters when and if the smaller institution moves to MePa. Rogues’ Gallery tells the whole saga of the pas de deux between the two museums, including the hilarious tale of how a merger was discussed for nearly twenty years and a Whitney Wing designed to be added to the Met, only to have the whole thing blow up over issues of curatorial arrogance and donor ambition (the two main subjects of the book). The Metropolitan was historically hostile to the contemporary art collected by the Whitney and its founder Gertrude Vanderbilt Whitney’s son Sonny wanted “something with his name on it that he controlled,” Flora Biddle, a granddaughter told me. That’s the fabulous Gertrude Vanderbilt Whitney above wearing a Leon Bakst costume, photographed circa 1913 by Baron Adolphe de Meyer. (Image snatched from http://attic-museumstudies.blogspot.com/2010/04/historical-hot-or-not-x.html)