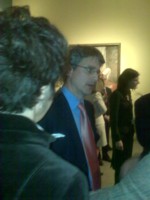 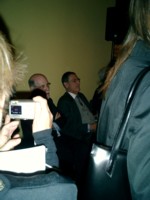 Tomorrow is the last day on the job for Metropolitan Museum of Art director Philippe de Montebello (above right), whose retirement earlier this year was first revealed by Gripebox. On Thursday, Thomas Campbell (above left) becomes the latest director of the greatest art museum in the world. Next year will also bring the publication of my new book, Rogues’ Gallery: The Secret History of the Moguls and the Money That Made the Metropolitan Museum (on May 12, 2009). Check back here regularly for more news on the book, the museum and how the latter is coping with the former. Also, this Christmas Eve was the 69th birthday of museum vice-chairman Annette de la Renta, who ran the committee that promoted Campbell. So goodbye Philippe, hello Tom, happy birthday Annette, and happy new year to us all. UPDATE: In an all-too-typical example of the museum’s tone-deaf approach to public relations, Campbell, a Brit, has given his first (only somewhat) meaningful interiew to the British magazine The Economist, instead of a home-grown periodical. It’s here. “I feel like a kid in a candy store,” he says, presumably referring to the museum and not America. “I feel like Dorothy in ‘The Wizard of Oz’; picked up by a whirlwind and dropped down in a land where everything is much more brightly coloured.”