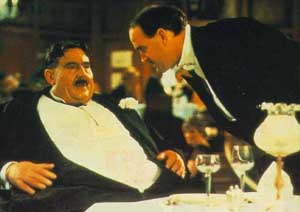 Today’s New York Observer confirms a story I didn’t want to believe — and didn’t repeat — when it was first reported a month ago: Rogues’ Gallery appears to have been silently banned by the New York Public Library, which received copies of the book from the distributor Baker & Taylor more than six weeks ago but has yet to catalogue the book or allow library cardholders to check it out and read it. (The Queens and Brooklyn libraries are doing good business with it, as are Manhattan bookstores). Annette de la Renta, the Metropolitan Museum trustee who threatened legal action against my publisher and me, and had her lawyers rattle sabers at several New York newspapers, too, is also a trustee of the NYPL. I’ve said this before in this pillar: Maybe it’s a coincidence. “Library officials had no comment,” the Observer’s Reid Pillifant reports. Now, there’s a surprise.
n.b.: Thanks for the proofreading, Rebecca!