Acidic Flashback to Trump’s Vietnam: A Dumb Deal Made by Morons 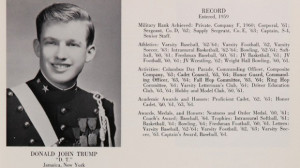 In 1999, in an interview for the book My Generation, I asked Donald Trump his reaction to protests against the Vietnam War when he was finishing his education at The Wharton School and winning draft deferments for alleged bone spurs. On this 75th anniversary of D-Day, his reply deserves another airing. He said in his inimitable fashion (lightly edited only to add emphasis and eliminate repetition):

“I always thought that the [anti-war] riots [of the late 1960s], as bad as they were and everything else, the tremendous conflict at home, gave the other side an incentive to go forward. Because essentially, they knew that all they had to do was just keep going. There was no way of making peace when you had this country being ripped apart from within. So I always…You know, I was an instinctive businessman. I always hated it, because I said there’s no way you can ever negotiate a peace because these guys can just sit there, and take some hits (which they certainly took), but eventually this country has to leave because it’s being torn. So I didn’t like what it did from the standpoint of negotiating some kind of settlement.

“I saw it as a deal…a deal that we shouldn’t be in, as a terrible deal. But I also saw that the riots really played right into the enemy’s hand. When you had people being literally shot all over, at many different locations, and you’d see the news… I mean, actually for a while the riots played a much bigger role in the country than the War itself. And I said … “There’s no way you can negotiate a settlement. These guys are loving what’s happening in this country.” So the riots, while well-intentioned, served a very negative purpose, because there was no way of ever making a settlement….

“Now, let’s go to the other side. We should have never been in that war. It was a terrible thing. And does that mean that every time a politician makes a mistake we’re supposed to go to war? You get some moron that makes a mistake and hundreds of thousands of people are dying. Does that mean we’re supposed to just go along because… There’s no way…

“I have a lot of respect for the people that rioted. I also know that it cost this country a lot, because you would have been out of that war… I think you probably would have had a good negotiated settlement. But what’s a negotiated settlement when you’re 24 hours away by jet? I mean, it’s ridiculous. It’s absolutely ridiculous. So I was very mixed on the war. I didn’t like it, but I would also have liked to have seen us get out, and I didn’t think we could get out with what was happening with the turmoil.”

Good thing he, at least, got out of it, right?