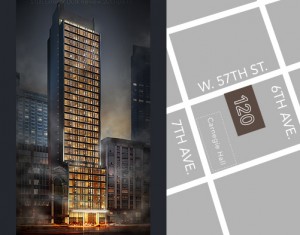 A while back, while guest-editing Curbed New York, I tried to give a nickname to the midtown neighborhood I’d moved to, and earned a flaming from the site’s ardent comment trolls. Today, in the New York Observer, Matt Chaban gives me a second chance, letting me dub 57th Street The Billionaire’s Belt, in a story about the rennaissance of residential life on the broad boulevard that uses the phrase in its headline. I’d still rope surrounding streets into the corral with the glossy new kids on these blocks (Roman and Williams’ exquisite 120 West 57th, which is at right, Extell’s One57, Harry Macklowe‘s 432 Park, and etc.), and let Beacon Court, the condos at the Plaza, Sutton Place, the Time Warner Center and the subject of my forthcoming book, 15 Central Park West join the money party. But I won’t ever call this Vuittown again. I’ve learned my lesson.