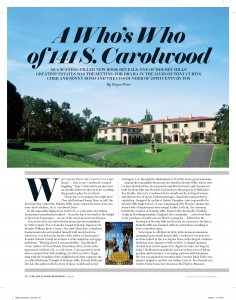 In its issue out today, Degen Pener of The Hollywood Reporter plumbs the pages of Unreal Estate for a four-page spread focused on one of the houses central to the book’s story, 141 South Carolwood, once the home of Joseph Drown, the creator of the Hotel Bel-Air, Twentieth Century Fox co-founder Joseph Schenck and his mistress Marilyn Monroe, oil man William Myron Keck, Tony Curtis, and Cher (and her beaux Sonny Bono, David Geffen and Gregg Allman). I’ll post a link later in the week once the story appears on THR’s web site.