Vornado and Extell: A done deal…and now, a race to the sky? Another Gripepad exclusive. 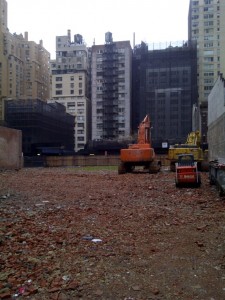 The mega-tiff between mega-builders Vornado and Extell over two almost-kissing development lots between West 57th Street and Central Park South, and Seventh Avenue and Broadway, has ended, and Vornado’s 220 Central Park South should start climbing soon, only a tad behind Extell’s Nordstrom tower. So says a source in a position to know, who reports, “They made a deal.” Not one to trust, this blog just paid a visit to the underground parking garage leased by Extell beneath Vornado’s property–reportedly the cause of the delay at 220CPS–and found it locked and empty, and the watchman on duty behind its gate confirmed that it has closed and will soon be a goner. Vornado has not yet responded to a request for comment. My source also confirmed–well, nearly–Gripepad’s report from May 2012 that Vornado is hiring Fifteen Central Park West architect Robert A.M. Stern to design its new condo–“It’s 99% sure”–and added one more tid-bit for now. “They’re going pretty high,” the source says. Which means war, at least for the Central Park views developers covet along the new Billionaire’s Belt. Until today, Extell (whose plans were first revealed here this week) had the view corridor to itself. Now? Advantage Vornado. (Image of Extell’s lot from a fine blog)