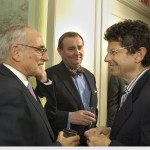 Bloomberg BusinessWeek is one of Gripepad’s favorite magazines, proving the value of print week in and week out. Last night, midweek, it issued a news alert that New York developers Extell and Vornado had confirmed that they’d made peace in a bitter dispute over two development lots and that Vornado would use Robert A.M. Stern (shown with this reporter in the 15 Central Park West sales office) as the architect for a new condominium tower at 220 Central Park South. Bloomberg failed to note that both stories were published here first and exclusively. The Stern/Vornado deal came first, seventeen months ago, on May 14, 2012. The Vornado-Extell peace treaty was revealed here just shy of two weeks ago. UPDATE: From Kara Wetzel, the editor of the BBW story, comes this: Their story was based on a Vornado press release issued last night, “and it’s standard practice to treat that as simple breaking news,” she writes. “You should note the WSJ and NY Times handled it in the same way in their stories today.” So, too, the New York Post, in fact. To which Gripepad can only repeat, the news broke here first.