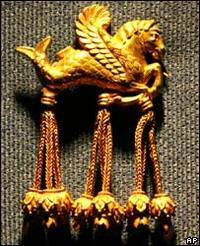 In a defense in today’s community newspaper of the potent argument that wealthy countries with wealthy, well-staffed museums should hang onto antiquities taken illegally from less powerful and less caring nations because they are better-equipped to preserve, protect, study and expose them, John Tierney undercut his argument by misrepresenting the role played in just such a case by the Metropolitan Museum of Art. That this happened in the New York Times isn’t entirely surprising, granted the Sulzberger family’s conflicting roles in the two institutions, but Tierney’s Met-centric description of the Lydian Hoard affair is a perfect argument for the case made previously in Gripebox that the Times has come perilously close to operating as the Met’s publicity organ. Tierney says the Met was pressured into returning the golden treasures to Turkey from whence they came — and clearly considers that a loss to all mankind. He neglects to mention that they were crudely looted, smuggled away and sold to a knowing Met after just such things were declared totally unacceptable by the United Nations. Tierney also neglects to mention that the “pressure” was a lawsuit prosecuted by Turkey that turned on the telling detail that the Met had known the stuff was looted and so had hidden it in its basement. When that came out in discovery, the museum caved in and returned the loot. It’s a shame you wouldn’t know that from reading the museum’s family newspaper.