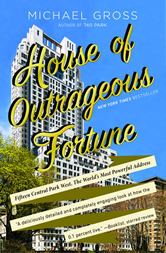 Preface: CLASH OF THE TITANS

Our hopes, like towering falcons, aim
At objects in an airy height;
The little pleasure of the game
Is from afar to view the flight.
—MATTHEW PRIOR, “TO THE HONORABLE CHARLES MONTAGUE”

The fourth-richest resident of New York City, Icahn, seventy-seven, is typically described as a corporate raider by detractors, an activist investor by admirers. All acknowledge that he strikes fear in the hearts of his prey. And he was cursing a blue streak at me.

He’d started almost as soon as I began telling him a story I’d just heard about an attempt he’d made, in fall 2005, to buy a new Manhattan apartment. And not just any apartment. It was one of a baker’s dozen of penthouses atop Fifteen Central Park West, a two-tower luxury condominium then under construction at the southwest corner of Central Park. Or rather, two of its penthouses, which Icahn, who already owned one about ten blocks away, hoped to combine into something Brobdingnagian, the kind of home only a man like him might be able to afford, and more important, to fill, not just with possessions but with personality, a presence as awesome as the building’s location.

But I’d also heard that this lion of finance had tried to haggle with 15CPW’s developers, demanding a price cut, which certainly seemed in character for someone who’d picked fights with Phillips Petroleum, USX, Texaco, TWA, and Time Warner. But that had turned out to be a tactical error, because the developers, Arthur William Zeckendorf and William Lie Zeckendorf, the third generation of a New York real estate dynasty, weren’t inclined to bargain.

Instead, the Zeckendorfs sold the double penthouse to the bidder behind door number two, Daniel Loeb, an equally prominent and pugnacious hedge-fund runner, another activist investor cut from the same cloth as King Carl. Only Loeb was a quarter century younger and willing to pay the full asking price. Which caused Icahn, on learning that he’d been outbid, to launch an epically profane tirade at Will Zeckendorf.

“‘Fuck this, fuck that.’ He said ‘fuck’ five or six times in thirty seconds, then slammed the phone down,” says Will. “Dan was in there early. He was a fabulous buyer.”

They didn’t really know Loeb when he’d called them up just as they’d begun selling apartments at 15CPW. Icahn had gotten to them first, introduced by one of the Zeckendorf brothers’ two partners, an Israeli-born billionaire named Eyal Ofer, who had invested with Icahn. Earlier that year, Ofer had pointed to 15CPW out the window of Icahn’s office at Fifty-Ninth Street and Fifth Avenue and said, “Look at that.” His new building, rising above the tree line on the opposite side of the expanse of Central Park, was an impressive sight.

It was also an impressive site: Fifteen Central Park West occupies the first full-block lot on the periphery of the park to be developed in decades—and likely the last for years. Its position is equivalent to oceanfront property in California, an Eiffel Tower view in Paris. Besides its immediate proximity to that 843-acre masterpiece of urban landscape design, 15CPW is also walking distance from Lincoln Center, Carnegie Hall, and the city’s best stores and restaurants.

Not long after Ofer pointed the building out to him, Icahn was invited to a small cocktail party in a temporary sales office near the 15CPW construction site, where the Zeckendorfs themselves showed him and his wife, Gail, a model of the Robert A. M. Stern–designed, limestone-clad building and floor plans of some of those penthouses. One had already been reserved for Ofer, another for Will Zeckendorf. But the rest were still available, and Icahn focused on the building’s thirty-ninth floor, with two apartments that, so early in construction, could easily be combined into the largest in the building, with 10,643 square feet of interior space, two terraces of 677 square feet, fourteen-foot ceilings, eight bedrooms, ten bathrooms, and 360-degree views of Manhattan and beyond. And it would cost a mere $45 million (plus $28,607.34 in monthly charges).

“We saw it, we liked it, I told them I was interested,” Icahn says. “I wasn’t that excited by it. I don’t invest in apartments.” But Gail Icahn liked it, and Gail wanted to move; a new building was planned right next to their current one, a few blocks to the southeast, and it was going to block the sunset from their fifty-second-floor terrace.

“I love the terraces,” Icahn says dreamily. Even billionaires dream. But the risk of losing his view was real and Icahn understands risk and value in his bones. “We talked about price at the cocktail party,” he continues. “I said it seemed high.”

Zeckendorf recalls that Icahn offered him only half the asking price. Icahn remembers it differently: he wanted only one of the two apartments. “There was no hondling,” he insists. “Bullshit.”

Eyal Ofer laughs often and loudly when telling his version of the story. “Icahn has got a problem. He refuses to pay. I said, ‘Carl, listen to me. This is not business. This is lifestyle. You will not find another ten thousand square feet in Manhattan. And it’s within walking distance from your office because you don’t like to take a car, it’s too expensive.’ And he said to me, ‘But you want too much money!’ I said, ‘Carl, this apartment will be worth double. Close your eyes and buy it.’ And then Will came and said, ‘Eyal, you brought in Carl, but I have Loeb, who wants it.’ He said Loeb wants to pay more than Carl. So I said, ‘Be fair to Carl. Tell him that you’ve got somebody who is prepared to pay more, but we are prepared to sell it to you, if you’ll confirm it now.’?”

“I called Zeckendorf back,” Icahn says. “He said, ‘Hey, I sold it.’ I said okay. I was almost glad. I didn’t want to move anyway. I don’t remember arguing with him. The fact that he didn’t call me back was off-putting. It’s not like he’s a bad guy. That’s what they do. He probably said, ‘Icahn’s looking at it, Dan, hurry up.’ We didn’t hear. Then I called or Gail called and he said it was gone. ‘Loeb’s got it.’ People love this shit. I love the terraces I got.”

After their phone call, Will reported back to Eyal Ofer. “He said that he had never been treated so poorly in his life,” Ofer recalls. “Now, every time I see Carl, he says, ‘You owe me an apartment!’ But he could not bring himself to pay the full amount. And he lives to regret it.”

Like every New Yorker, Carl Icahn is fascinated by the ins and outs of local real estate. He loves to talk about it and, deep in his heart, likely knows that, after turning his back on 15CPW, he became one of the outs, which is evident as he rambles on, “Look, in retrospect, the building made sense.”

The reason is that prime Fifth and Park Avenue buildings, the ones the writer Tom Wolfe called “the good buildings,” are all cooperatives, not condominiums; in a nutshell, they operate like private clubs and have for years excluded people like Icahn and Loeb, the sort of rough-and-tumble, loudmouthed, first-generation rich guys—many, but not all of them, Jewish—who don’t care whom they offend, guys whose hard edges have yet to be smoothed by a desire to fit in. Co-op owners are the kind of people who reject, not the ones who get rejected.

Icahn doesn’t reject the rejection argument, but says what’s really great are 15CPW’s resale values. At $10,000-plus per square foot for its best spaces, the condos at 15CPW have defied conventional wisdom, the stagnating world economy, and, to some, common sense, too. In 2013, Sanford I. “Sandy” Weill, the financier who created Citigroup, sold his 15CPW penthouse—the second largest after Loeb’s—for $88 million, twice what it cost him six years earlier and the highest price ever paid for a Manhattan apartment. “Big trophies are running high,” Icahn says. “But I don’t look at apartments or New York real estate as investments relative to what we do. Since 1968, when I started Icahn and Company, our annual returns have been thirty-one percent. No real estate comes close to that.”

Will Zeckendorf admits that Icahn is right about what happened. “Carl just could never hit the number,” Will says, “and Dan [Loeb] to his credit, when we said, ‘Listen, we’re talking with someone else,’ he said, ‘I’m there.’?” Loeb had called the Zeckendorfs himself, without a broker as an intermediary. He’d heard about 15CPW from someone at Goldman Sachs, the renowned but wildly controversial investment bank, which was the third partner in developing the building. Theirs is a small world in which people want big homes high in the sky.

Normally loquacious, even loudmouthed (his pugnacious open letters to companies he feels are mismanaged are famous), Loeb won’t discuss his purchase. But the Zeckendorfs are full of praise for him. “He completely flattened [Icahn] . . . destroyed him,” says Will. “Full price, no flinching, no bad, naughty words.”