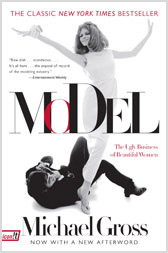 The Ugly Business of Beautiful Women

A "sweeping history of the business."Vanity Fair, May 2006

The definitive story of the international modeling business—and its evil twin, legalized flesh peddling—Model is a tale of beautiful women empowered and subjugated; of vast sums of money; of sex and drugs, obsession and tragic death; and of the most unholy combination in commerce: stunning young women and rich, lascivious men.

Investigative journalist Michael Gross takes us into the private studios and hidden villas where models play and are preyed upon, and tears down modeling’s carefully constructed façade of glamour to reveal the untold truths of an ugly trade.

“I read it in three days and then I got very sick. Girls and their mothers and fathers and anyone who wants to go into modeling should read this. It’s a history but it’s also a guidebook to the pitfalls. It’s very important.” — Lauren Hutton

“Michael did a valuable service by letting people know that this is out there.” — ex-model Halle Berry

“Model… is to high fashion roughly what Upton Sinclair’s The Jungle was to the meatpacking industry… [a] relentless evisceration of an industry normally swathed in more shadows and light than Cindy Crawford… Michael Gross… did a stunning amount of research. His real talent, though, is getting powerful people to go on the record with astonishing candor. Scandalous… the exposé of record of the modeling industry.” — Entertainment Weekly

“An elegantly aimed dagger to the heart of the posing profession that has already incurred shrieks of wounded outrage from both the skinny girls and Svengalis who shit on them.” — Spin

“Modeling is a dirty business — and we can’t get enough of it… The book… names names and dishes dirt, on-the-record kiss-and-tell.” — Newsweek

“Sprawling… energetic… Gross has obviously thought deeply about the machinations and meaning of the modeling business.” — People

“Dishy and detailed. Not a pretty picture.” — Associated Press

“Lifts the veil that has shaded the business of creating glamour. Meticulous research, candid quotes and page-turning stories. Exhausting, exhilarating — and the reason Mr. Gross may never do lunch in fashion circles again.” — The Dallas Morning News

“Exposes the powerful skin trade with all its boils: Tales of unscrupulous scouts, fickle fashion editors, sex-starved playboys, temperamental photographers, greedy agents and the fringe celebrities swaying at the hem. And let’s not forget the models — from early luminaries Lisa Fonssagrives, Dovima and sisters Suzy Parker and Dorian Leigh to today’s supernovas, Christy Turlington, Naomi Campbell and Linda Evangelista — in all their vain, vacuous splendor. Delicious dirt.” — The Hartford Courant

“A dishy, no-punches-pulled look at the seamy underbelly of modeling’s glossy surface. But where tabloid journalism would stop at such facts, Gross uses them as a starting point for a weightier analysis. He reveals the inner workings… A veritable encyclopedia of modeling that serves as a cautionary guidebook for any parent whose child is interested in becoming the next Naomi Campbell.” — The Detroit News

“A record of the inner mechanics of the business from the ’20s to today. Gross must be one hell of an interviewer, since his subjects spoke without restraint and provided plenty of devastating, behind-the-scenes gossip. No detail is left out.” — The Boston Phoenix

“Gossipy, bitchy and probably seminal. Gross pulls no punches. Model is a litany of skullduggery and dirty dealings. The drugs, sex and sleaze is waist-deep at times. The bitchiness and backbiting, a constant.” — San Francisco Examiner

“Wild and not so pretty.” — Women’s Wear Daily

“The most talked about book on the stands. A tale of beautiful girls led astray.” — Palm Beach Post.

“Salaciousness to spare. Its tales of group sex, galaxies of drugs, battering husbands and power-crazed agency heads have set the industry abuzz.” — Newsday

“The most honest portrayal yet of an industry that can ruin a young girl’s life just as easily as it can bring her fame and fortune.” — The Boston Globe

“Gross exposes the yens and yangs of all.” — The Houston Post

“Wow! Gross dissects the minutiae of the glamour-girl racket with admirable objectivity.” — The Atlanta Journal and Constitution

“Gross packs an incredible amount of information — and revelations — into this comprehensive history of the modeling business. But his writing style is so tight, so graphic, you never feel bogged down in the details or overwhelmed by the scope. In rapid succession, he makes your mouth water, your eyes boggle and your blood boil.” — The Orlando Sentinel