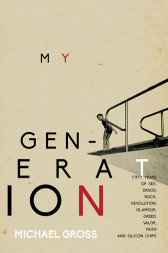 This “thought-provoking” (Kirkus), “mesmerizing” (Tama Janowitz), “wide-ranging” (Red Herring), “unsettling” (Denver Post) book is the collective biography of the Baby Boom generation — and a social history of the second half of the 20th Century.

My Generation tells of nineteen quintessential boomers — from an LSD chemist to a software pioneer, from a Weatherman bomber to Donald J. Trump, from an anti-war cartoonist to an ultraconservative congressman, from a rockstar’s girlfriend to a hip-hop impresario — and their wild ride into the twenty-first century.

Eerily prescient, the book includes the stories of a founder of the Federalist Society, credited with the rightward lurch of America’s judiciary, #MeToo target Russell Simmons, 2019 presidential candidate Marianne Williamson, and many others.  See the Cast of Characters for a complete list.

First published in 2000, and long out of print, My Generation is now available again, exclusively as an e-book.