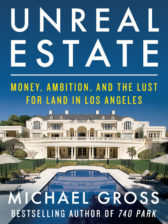 These Walls Are Talking

With his bestselling books Model and 740 Park, author Michael Gross has established himself as the preeminent chronicler of America’s rich and powerful. While his previous works have peeled back the façades of fashion and New York’s old society scene, in UNREAL ESTATE: Money, Ambition, and the Lust for Land in Los Angeles (Broadway Books; November 1, 2011), Gross turns a provocative eye on the West Coast and serves up an all-new way of seeing a place we think we know, but really don’t.

In UNREAL ESTATE, Gross traces the little-known history of Los Angeles through its most luxurious real estate. Focusing on sixteen homes in the best and most exclusive neighborhoods of Beverly Hills, Bel Air, Holmby Hills, and Beverly Park, he takes us behind the gates and past the multi-million dollar security systems to expose the world’s richest enclave and the fascinating folks who live there. After an opening that mixes mobsters, movie stars, and some of the world’s richest homeowners, Gross flashes back to the creation of this fabled district, imposed upon dusty fields and rugged impassible mountains by oil and railroad pioneers, and takes us through a century’s growth to La-La Land’s present-day mega-mansions that have come to symbolize the ultimate in trophy real estate. Along the way, we learn the hidden, sometimes sordid, always fascinating history of an incredible cast of characters from founding fathers such as Alphonzo Edward Bell, Burton Green, and Edward L. Doheny and their families, to stars like Douglas Fairbanks, Marilyn Monroe, Jayne Mansfield, Kenny Rogers, Cher, Tony Curtis, and Sylvester Stallone; entertainment moguls such as Suge Knight, Ted Field, and Marvin Davis; historic business titans including Howard Hughes, Conrad Hilton, and David Murdock; and contemporary luminaries of tabloids and business pages like former First Friend Ron Burkle, Gary Winnick (who took hundreds of millions out of Global Crossing just before its collapse), “liar loan” pioneer Roland Arnall, and Lynda and Stewart Resnick, whose philanthropy is balanced by their litigiousness.

Gross paints compelling portraits of these homeowners perched at the pinnacle of society in Southern California, telling the stories of their lives through the homes in which they’ve lived, all the while illuminating the even bigger story of a people and a city that represents, as Gross calls it, “the mecca of self-invention.” With a potent combination of detailed reporting and wildly entertaining prose, UNREAL ESTATE gets up close and personal with LA society, exposing the hidden depths of a place many think shallow.

About the Author
Michael Gross, a provocative journalist and New York Times bestselling author with a formidable backlist, is a contributing editor at Travel + Leisure and frequent contributor to the Huffington Post. He’s worked for the New York Times, New York, GQ, and Esquire, and has written for Vanity Fair, Gawker, George, Town & Country, Architectural Digest, and dozens more newspapers and magazines around the world. Curbed.com, the national real-estate blog, calls him our “foremost chronicler of the upper crust.”