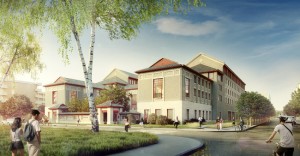 In the last pages of 740 Park, written nine years ago, I challenged Stephen Schwarzman to live up to the standard set by John D. Rockefeller Jr., who’d once owned the private-equity chief’s apartment in that fabled building, and add significant philanthropy to his resume. It took a few years, but Schwarzman did take up that challenge, as has been noted in this space. Today’s New York Times finds the Blackstone boss in China, giving away money for good again, donating a third of the cost of a new $300 million scholarship program for study in China, and helping raise the rest. As at the New York Public Library, recipient of his first $100 million gift, which renamed its main building for him, the program and the new college (at right, as designed by 15 Central Park West architect Robert A.M. Stern) will both bear his name, distinguishing his gifts from those of Rockefeller and the great friend of libraries, Andrew Carnegie. But let’s not quibble. That’s what it takes these days. Ya did good, Steve. Keep it up.