Horses (with apologies to Patti Smith) 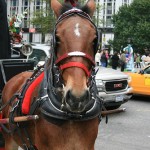 In “All The Mayor’s Horses,” on The Awl, writer Brendan O’Connor tackles the ticklish and abiding question of New York’s horse carriage trade, which has been a (forgive this) pet subject in this pillar for several years now. In 2009, Gripepad mocked a proposal to replace the carriages with ersatz vintage electric cars. The actual proposal was then sent to me by a carriage proponent, and Gripepad revealed a possible pecuniary motive behind the move to ban the beloved horses: a hunger for the real estate (what else could it be in Manhattan?) the horses’ stables occupied. The Awl cites that scoop in its blame-them-all commentary, including anti-carriage kingpin Steve Nislick, whose foot soldiers launched an electronic hate mail campaign against me and my editors when I returned to the subject in Crain’s New York Business two years later. Thereafter, Gripepad couldn’t help cheering the public campaign to pull the reins on then-new Mayor Bill DeBlasio‘s support of Nislick and his crew, who (what a coincidence) had spent a fortune supporting DeBlasio’s run for mayor. Now, after several years of failing to win support for a reciprocal ban-the-horses campaign pledge, DeBlasio has forged a consensus around the very same proposal made in that last Gripepad item, to wit: “Let’s put stables back in Central Park, keep the horse carriages there as well, and put an end to demagoguery that makes New York look like Orlando.” Needless to say, even that compromise (which also–huzzah!–includes a partial ban on the city’s widely reviled pedicab population) has caused widespread consternation, all of which which brings us back to The Awl. It deems DeBlasio “affably inept” and the whole controversy “absurd and acrimonious.” Writer O’Connor also reveals that Nislick’s advocacy group, NYCLASS, denies any interest in the real estate occupied by the stables and has vowed not to buy any even if it is eventually offered for sale, and that Nislick has called political contributions “a morally corrupt investment,” and said it would be better to kill the horses than allow them to keep working. Oddly enough, my suggestion that death might be the fate of the horses in the event of a carriage ban was precisely the point NYCLASS’s hate-mailing supporters found so objectionable in the first place. For once, I’d propose, DeBlasio is right. Not that it’s done him any good. (And please, let’s keep an eye on those West Side stables and whatever vultures might choose to circle them in the event the City Council passes the compromise plan.)