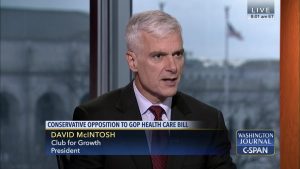 Axios reports that Donald Trump is furious at David McIntosh, president of the right-wing Club for Growth (pictured), for urging him to endorse a candidate who just lost a special election in Texas. Why would I care about a loser and his ill-advisor? Because both Trump and McIntosh are characters in my book My Generation, released in 2000, now available as an e-book which you can buy here. Its thesis was that the Baby Boom was a big tent that included not just the obvious rock and rollers, druggies, gays and assorted progressives and libertines, but arch-conservatives like McIntosh, a former congressman, and oinks like the ex-prez. I got the right interviews, but in the wrong decade. Too much too soon, you might say.